Applecross is a Peninsula of Wester Ross in the Highlands of Scotland. It is a collection of villages from Toscaig in the South to Ardishlaig in the North. Most people refer to Shore Street as Applecross, the idyllic row of whitewashed cottages next to the famous Applecross Bay.

Set on the shores of the Inner Sound, this gem of the Western Highlands offers visitors true peace and tranquility. There is an abundance of scenery and wildlife in the area. Applecross is also the ideal location in which to base yourself if you want to explore the West Coast of Scotland. It gives easy access to the Isle of Skye, Lochcarron, Shieldaig, Torridon and Gairloch. 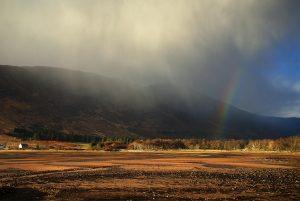 Visit Scotland says, ‘Applecross has a wonderful “end of the world” feel about it’. This is probably due to its inaccessibility. There are only two ways of getting to Applecross. The winding coast road from Shieldaig boasts a succession of stunning views and the Bealach na Ba, locally known as the ‘hill’ or ‘pass’, is the highest road in Britain. It reaches 2053 feet in a distance of less than six miles. The ascent has Alpine like hairpin bends and sharp drops into the spectacular valley that can be daunting for fist time visitors to the area. It then descends into the quiet village of Applecross where a warm welcome awaits.

The various habitats, coastal, woodland, moorland and mountain, are home to a wide range of plant and animal species.

The economy is now dominated by the tourist trade although fishing, crofting and construction still thrive in the area. All of these industries rely on visitors to survive and so Applecross welcomes you to enjoy what we have to offer.

The Primary School has nine children, one head master and a couple of visiting teachers. Thirty years ago that figure was twenty seven children, two full time teachers and one visiting. The Applecross community has not given up and volunteers work hard with a newly established Community Company to reverse the depopulation trend.

The Community Fuelling Station is their latest success story. We now have unmanned petrol pumps that stand outside The Junction and run 24/7, so long as the broadband connection doesn’t give out. Their next project is the development of a hydro electric scheme to raise money towards community housing. With every available space in demand for tourist accommodation there is an increasing shortage of homes for local families and young people.

Future projects for the Community Company include the establishment of a broadband service that can deliver 4Mb of download instead of the half Mb of intermittent internet that we now experience.

Applecross has an important cultural, religious and natural history. When visiting the area, an enlightening trip to the Applecross Heritage Centre can be made to discover more about the local history.

Nine thousand years ago the first settlers made their home under the overhanging rock face at Sand. These nomadic hunter-gatherers followed the retreating ice sheets, fishing and gathering along the newly exposed shore-line. Signs of this was discovered by the Archaeological Society during their research into the Applecross area.

The next archaeological evidence of settling and industry is the recently excavated Broch or complex roundhouse, situated on the rise behind the Applecross Campsite. It is dated to as much as two thousand years ago. Brochs are usually associated with the Iron Age. Not a lot is known about the people who built them but the ongoing excavation will uncover more clues to their lives.

An important figure in the introduction of Christianity to the British Isles, St. Maelrubha, arrived in 673 AD to establish his monastery here. The Peninsula has been known by its Gaelic name A’Chomraich, the Sanctuary, ever since.

This was fairly short lived however as the invading Norsemen, commonly known as Vikings, destroyed the place within a hundred years of its being built. It is believed that St. Maelrubha’s remains are buried in Clachan graveyard, in the South East corner between two rounded beach stones.

Applecross remains in the history books into the Middle Ages with its connection to the Earl of Ross. He helped to defeat the Lord of the Isles and paved the way for the unification of Scotland. Unfortunately he did not stay to make this his home but settled on the East Coast.

In 1715 the MacKenzie laird backed the bid of the ‘Old Pretender’, James Francis Edward Stuart, for the throne of Britain. On the failure of the Jacobite uprising he paid for this with the confiscation of his lands. By 1745 the land had been reclaimed and the ‘Young Pretender’, Bonnie Prince Charlie’s, bid for the throne had begun. This time however the MacKenzies refused to take part in the campaign.

The Highland Clearances took place around 1830. Applecross did not have a forced clearance like so many other Highland areas, it was economic, as it was in the Lowlands of Scotland. The Lairds wanted money from the tenants rather than grain or livestock to supplement their lifestyle at court. If the tenant couldn’t pay they were turfed out.

As there is not a lot of modern development in Applecross the historical remains of buildings and townships lie all around. You can pick up a leaflet from the Heritage Centre that will show the location of Clearance villages and those abandoned in the outbreak of Tuberculosis, also round houses, lime kilns, farms, the Mill Pond, the Big House and the Broch.

The real decline in population in Applecross happened after the First World War. The returning men were not happy to settle back to a life of low pay and backbreaking labour in the fields or at sea. They sought their fortunes in new industrial centres like Glasgow or abroad in Canada, Australia, New Zealand or even Argentina.

Applecross is only now starting to halt this decline with the proactive Community Company and new settlers arriving, opening businesses and employing local people. There is plenty to be optimistic about. 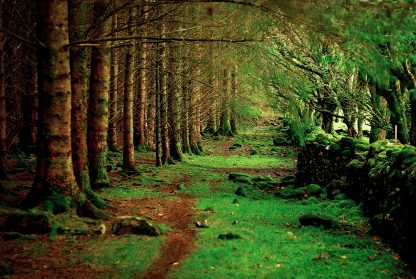 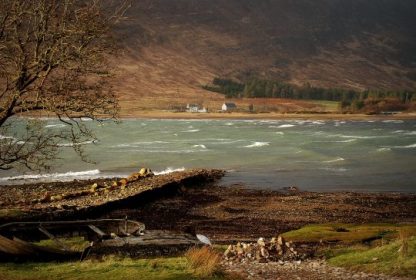 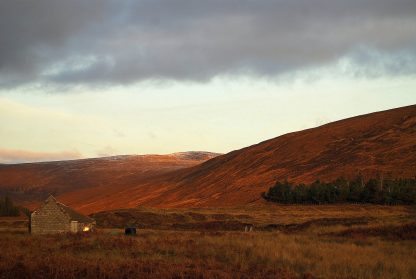 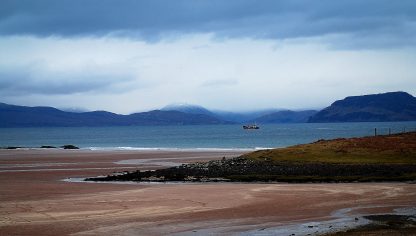 The Applecross Peninsula boasts a variety of habitats that are home to an awe-inspiring range of animals, flora and fauna.

Along the coastline are rocky shores, sandy beaches, sea caves and sand dunes. Of particular interest is the white ‘coral’ beach at Ard Ban. The ‘coral’ sand is actually the calcareous remains of several species of red seaweed which make up the so called maerl beds. This unusual habitat is only found in 1% of the UK’s inshore waters. Coastal plants of the area include scurvy grasses, oraches, thrift and storkbills.

Common seals are regularly seen lounging on offshore rocks, where they have their pups, or swimming in the sea. They are easiest to spot on the rocks near Poll Creadha. Otters are another member of the area’s wildlife community. Further out to sea porpoise, mink whale, bottle nose dolphins, basking sharks and white tailed eagles can be seen, albeit sporadically. 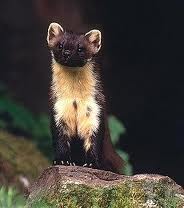 In the rivers of the surrounds fresh water pearl mussels have been recorded. Although it is now illegal to handle these without a licence. More noticeably in sheltered coastal areas, otters can also be found near fresh water along with healthy populations of water voles.

The moorland of Applecross is composed largely of three species of heather; ling, bell heather and cross leaved heath. They cover the ground together with the insectivorous sundews and butterworts, the aromatic and reportedly midge repelling bog myrtle, cotton grasses, marsh orchids, the tasty and nectar rich lousewort, the distinctive yellow bog asphodel and the bog rushes, sedges and grasses such as molinia. The colourful sphagnum mosses are known for their antiseptic and high absorbency properties, which made them useful as wound dressings. They are especially evident in areas of blanket bog. Birds such as golden plover, skylark, merlin, greenshank, dunlin, red grouse and the occasional black grouse favour this moorland habitat and it is not uncommon to see an adder snake basking on a rock in the sunshine.

Applecross has resident populations of golden eagles that occupy the mountainous areas. Dotterel and ptarmigan range over the hills as does the blue hare, which characteristically turns from brown to white in the winter. There is also a 4235 hectare SSSI (Site of Special Scientific Interest) in the curries of Bheinn Bhan, designated thus due to its specialised flora and inaccessibility to grazing animals. 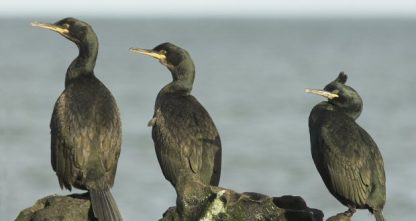 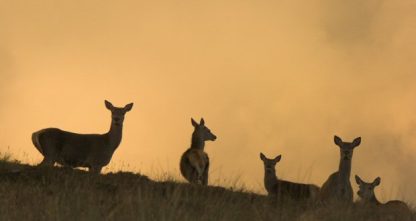 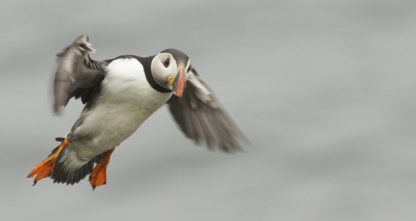 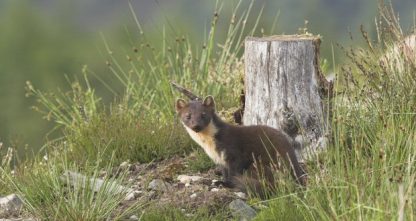 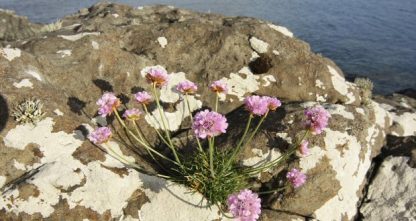 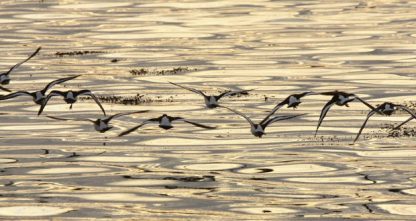